Set on the edge of the Cheshire countryside, close to the Trans-Pennine Trail, the Warrington Scout Campsite and Activity Base really is a hidden gem within the picturesque cobbled village of Grappenhall.  Cobbled streets, stone buildings, canal bridges, a village school and Norman church form the character of this delightful conservation area.  It's ideal for your group camps, family camps, pack camps, sleep overs and expedition practise camps etc.

We are looking for adults who could do occasional warden work at our Grappenhall campsite, seeing campers on and off the site, handing over keys and collecting same in and checking all is tidy when they leave.

A small group of volunteers carry out maintenance work at the site, e.g. strimming, grass cutting, pruning, building repairs etc. Extra adult helpers would be appreciated.  This is not a lot of work, in the season one evening a week and occasional hours at a weekend to suit your availability.

The campsite badge shown here is available for purchase. 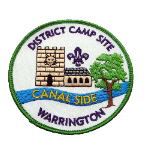